Many people dismiss the Genesis account of the origin of humans as a myth. However, modern genetics is now a friend of Genesis on several fronts.

First, science has now proved all women are descended from a single woman, and all men from a single man. The dates given for these two ancestors range from 25,000 to 450,000 years, far too short for the evolutionary timescale. The evolutionary excuse is that there must have been a bottleneck in human numbers not far ago in our history. But the objective evidence fits perfectly with the Biblical claim. This is now beyond dispute.

Second, there is recorded in Genesis a long term exponential biological decay curve in human longevity. 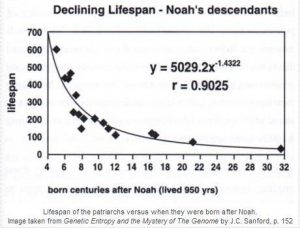 The ancient Hebrew people faithfully recorded the lifespans of all descendants of Noah over 70 generations. The result is astounding. It also follows a near perfect exponential biological decay curve. Some will scoff at this data. But there are only two options for explaining its accuracy. Either these figures were made up by the authors to perfectly match an ancient and sophisticated scientific understanding of exponential biological decay curves that was only recently rediscovered, or the figures are real. Common sense suggests the latter.

Third, there is now great fear amongst geneticists that we humans are encountering ever-increasing genetic entropy. This lines up with the exponential decay curve shown above and is the opposite of the “onward and upward” myth of evolutionary beliefs. Jams Crow’s estimate of a 1% drop in human genetic fitness per generation produces a slow exponential biological decay curve.  Michael Lynch’s estimate of a 5% drop in genetic fitness per generation produces an even more dramatic exponential biological decay curve, validating the Hebrew figures.

Fourth, we can now use this genetically proven decay rate as a clock to work backwards and forwards. Our genetic fitness levels are now only one-fifth what they were a mere 6,000 years ago. Extrapolating our linear mutation rate backwards brings us to perfect genome fidelity some 4,000BC.

We now have over 10,000 genetically caused diseases and it is rare for a family on earth to be free of them. Some secular geneticists are now predicting future male fertility rates at 1% of today’s levels in another 100,000 years due to the current mutation rate in the male Y chromosome alone. There’s a word for that; extinction.

Michael Lynch is professor population genetics and genomics at the University of Indiana. He sees major deterioration in the human genome in just the next few hundred years: “Without a reduction in the germline transmission of deleterious mutations, the mean phenotypes of the residents in the industrialized nations are likely to be rather different in just two or three centuries.” (Rate, molecular spectrum and consequences of human mutations. PNAS 107 (3): 961-968).

Extinction will occur in tens of thousands, not millions of years. This is a fact, and one the human race does not want to acknowledge as it overturns all of its arrogant pride in independent self-advancement.

These facts, and many others in my essay Genetic Entropy are proof that the human race was indeed once cursed, is growing weaker with each generation, and is now on a slow path to extinction somewhere in the next 100,000 years, Exactly matching the “myth” of Genesis!