When a baby bird is first born it’s mental DNA is programmed by to lock onto the first adult bird it looks at, and from that moment it will assume it is their parent. This God-given ability really helps when you have a flock of birds in the thousands. However, funny things then happen if another animal is the first thing they see when they are born! 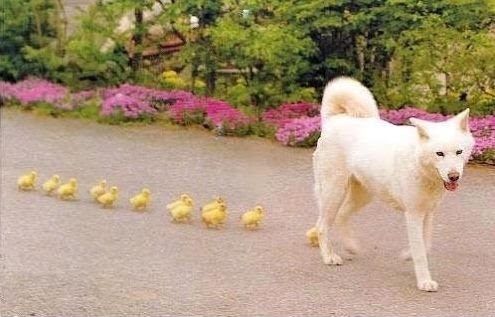 As it is in the natural world, so it is in the spiritual world. The first things that happen in the first few weeks after a person, or a family, or a friendship group become a new disciples will set in place the DNA of their future walk with God.

If the first thing they do is go to a traditional Western church, then that pattern of doing Christianity will become locked in and DMM growth stops. However, if it is praying for and winning their friends and family for Jesus then that will likewise become locked in as normal.

We MUST set up the right DNA from the beginning.

Start by remembering that many amazing things will have just happened to this new Christian such as:

These are some of the exciting things Jesus meant when he declared his mission statement in Luke 4:18-19 was to set people free and give sight to the blind. This is the heart of the Good News (Ezekiel 36:24-32). They will be very excited.

Next, ask them if they know anyone else close by who needs to hear this great message that has just changed their life. If so, ask the new disciple to go and get them. Together the two of you can share the Gospel with them. Give time for the new disciple to share about how Jesus just set them free. This confirms the DNA of their role as an evangelist straight away. It declares their new faith publically. It could see others come to faith, and makes them responsible for the salvation of their oikos.

3. Begin a DBS on the 9 commands of Jesus

Next, organise to start doing Discovery Bible Studies (DBS) with them as soon as possible so they can begin to discover how to live the Christian life day by day. Nearly all experienced DMM trainers and leaders will also say that if you do not start discipling within 48 hours it becomes harder to gain momentum. They call it the Rule of 48! So try to have the first one within two days.

The first lessons will be on the 9 specific commands of Jesus:

Do as many DBS studies as they are happy to do, but don’t drag it out. Let them set the pace but definitely do more than one a week. These commands are elaborated on in more detail in a later lesson in the Growing Field called The Nine Commands Of Jesus. A DBS will challenge the new disciple or disciples to share what they have learned with someone else, and to put into practice what they have learned. They are then held accountable the next meeting to have both obeyed the lesson and shared the lesson. Sharing locks in learning really well.

As well as starting a DBS, encourage them to also read the scriptures on their own as much as possible. Show them where the Gospels are and starting there. Prayer with the Lord will come naturally for most if they are from a Muslim background as many will be coming from a religious tradition that strongly emphasises ritual prayer. However, now for the first time it is personal and relational, with God speaking to them directly (John 17:3). This will be very exciting for them. Encourage it.

Always ask them to invite their friends and family to the next DBS and always have the DBS at their preferred location, not yours. The Gospel grows best where it is planted and first sprouts. The change in their lives will be evident to their family. They will be excited and this will create interest among their family and friends. Older traditional Christian believers sometimes feel ashamed of sharing the Gospel. A new believer will be excited to do the exact same thing (Romans 1:16, 2 Timothy 1:8).

If the disciple is living in a hostile home environment or culture then these studies may be need to be one-on-one for a while until they are sure of their new faith. However, if you are working with a person of peace (Luke 10:1-7) or a 4th soil person (Luke 8:8) who has influence over their household or community then it will be totally different and they will gather others easily and begin leading others quickly.

Most Indian DMM movements also teach a new disciple how to daily walk around their neighbourhood and pray for more salvations as well as blessings on that area. They ask the Holy Spirit for the next soul and person of peace and opportunities to see healings and miracles. The first time you go out they will watch you do it. Next time they participate with you. Soon they can do it on their own or with other new believers. This is a great practice for them to later repeat when they are discipling others. It’s good spiritual DNA.

Ying Kai saw 2 million people discipled in his movement and he set the goal of  a minimum of five Gospel seeds being sown by every believer every week. This is a good idea for any movement and if you model it yourself they will automatically pick it up as well, especially if you take them out sowing with you as soon as possible. This is also good spiritual DNA.

5. Teach them about God’s voice and the Holy Spirit

It is vital for a new disciple to learn to hear God’s voice early in their walk. The earlier they can clearly hear God’s voice the more quickly he can guide them directly. Jesus said his sheep will hear his voice (John 10:27-28). Hearing the Father’s instructions was the cause of most of Jesus’ miracles and healings. However instead of weighing down this lesson with details on how to do this, it is treated separately in this Growing Field in a lesson called The Role of the Holy Spirit in Discipling.

Sometimes in traditional evangelism we count numbers and brag about those numbers. Not so with DMM. It is NEVER about numbers. Let God take care of the numbers because it’s his church. He owns the movement and we are privileged participants in his movement. Your motivation should be a heart of love that reaches out to a heart that is suffering under Satan (1 Peter 5:8). Love is the language of heaven. It is the heartbeat of God. It is the core of his being. Please reflect this to those you win for Jesus (John 13:34-35, 1 John 4:7-21). Everyone responds well to love.

If you are of the opposite gender as your new disciple, such as in Luke chapter 4 when the woman at the well met Jesus, then stop discipling as soon as possible after their salvation and fetch someone of their own gender to take over. Satan has ruined too many salvations because of temptation in this area. This should not be a problem in most countries across the Middle East and South Asia as evangelism is already mostly along gender lines.

2. Backing off is healthy

Normally you will lead the first 3 to 5 Discovery Bible Studies. However, after that you should watch and help as the new believer or group of new believers slowly assumes ownership of the Bible study once they know the pattern. This early handover is important as it gives them the ownership of the study, trains them in how to do the study with others, and helps them to see the Holy Spirit as their primary teacher, not you.

If there are several people being discipled by you, then you should eventually stop going to their DBS altogether, but only after you know things are on a solid foundation. From then on your role is as an outside mentor to the emerging leader of the group. Meet with the leader and train them, but not with the group. This helps the emerging leader to grow much faster in their faith. If you lead much longer than 4-5 times you will automatically create relational dependency. This is not healthy spiritual DNA. The first few months is all about their salvation and their discipleship under the guidance of the Holy Spirit. You are just the coach.

We talk more about this in the Fourth Field lessons.

The same principle applies to the many other aspects of their training and growth in God that will be taking place as well; train them to competence and obedience then back off. Spiritual children need to test their wings. Restricting most new believers from the work of the ministry is the great failing of Western Christianity. Encourage your new disciple to grow and test their new skills, and in pairs if at all possible.

Always be led by the Holy Spirit in everything.